We are pleased to announce that two major Mountain Parks projects are in contention for Denver’s anticipated 2017 General Obligation (GO) Bond request.

The “Park Structures and Infrastructure” project would request $2.0 to $4.5 million for renovating shelters, historic features, and general infrastructure throughout the Mountain Parks system in order to bring facilities up to modern standards. 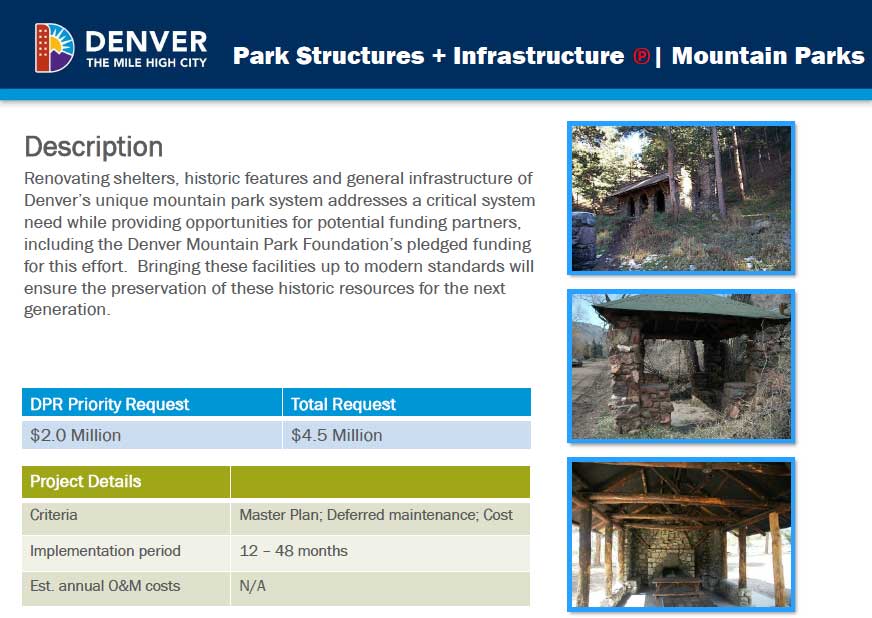 The “Morrison/Genesee CCC Camps” project would request $4.0 to $6.5 million for renovation and rehabilitation of the historic Morrison and Genesee Civilian Conservation Corps (CCC) camps located in Red Rocks and Katherine Craig Mountain Park. According to a Denver Parks and Rec presentation, “This project provides foundational funding to allow an extremely beneficial partnership opportunity that can assist in the continued restoration of these facilities while also activating them with youth career training and education activities.”

This partnership would allow the Denver-based, national nonprofit Historicorps to relocate their headquarters to the Morrison CCC camp, and to make significant contributions to historic preservation work throughout the mountain park system.

The Morrison camp is of national historic significance as one of the only nearly-intact CCC camps remnant in the United States of 2,500+ camps that were created between 1933-1942 during the New Deal era.

Together, the two Mountain Parks projects represent $6-$11 million of the total $136-$252 million of “department prioritized” Parks and Rec projects. In each instance, the lower figure in the range represents the minimum viable funding for a project and the larger amount portrays the full estimated project cost.

Overall, this compares very favorably to the 2007 Better Denver Bond in which no specific Mountain Parks projects were included in the final $95 million of Parks and Rec projects.

After selecting a final list of proposed rehabilitation and capital infrastructure projects, Denver plans to seek bond authorization from voters in November 2017.

For full information, please see the foundation’s official position statement below, and details about the public comment process.