In Honor of Pat Gallavan

We owe a lot of the later history of Denver Mountain Parks to Pat Gallavan, who served as superintendent from 1960 to 1970. Always solid in his support for these special parks, Pat documented his period of tenure and lobbied, usually unsuccessfully, for funds for basic maintenance and improvements. He oversaw the designation of Summit Lake Park as a National Natural Landmark in 1965, and sought grants (to supplement lean budgets) that provided for upgrades throughout the system. 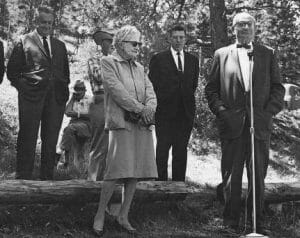 Superintendent Pat Gallavan (second from right) at the dedication of Dillon Park (part of Cub Creek Park) in 1966.

“Pat juggled many jobs as city forester, editor of the Green Thumb magazine, hosting a gardening show on PBS, penning a newspaper column for The Rocky Mountain News and also lent his green thumb to the beginnings of the Botanic Gardens. In 1960 Pat landed his dream job when he was hired as the Superintendent of Denver Mountain Parks. He retired 26 years later as Deputy Director of the Denver Parks System, where the biggest perk involved inspecting the grass at Mile High Stadium after Broncos games.” —Obituary at Horan & McConaty

Gallavan brought professionalism and creativity to the superintendent job.

“Patrick Gallavan assumed the role of Mountain Parks Superintendent in 1960 and wrestled with the implications of the growing foothills population and resulting pressures on the parks. Near the top of his July 1963 report on mountain park operations and projects, Gallavan’s observation that “this work is always with us” captures the essence of the job. His staff spent much of its time is on routine maintenance—of buildings, roads, forests, and the parks themselves. …

“For the Parks & Recreation bond issue that went before voters in 1964, Superintendent Gallavan detailed needs for $990,000 for mountain parks, of which $500,000 would fund urgently needed repairs and redevelopment of facilities, including roads, toilets, parking areas, and picnic units. The remainder would go toward more visionary developments intended “to serve the increasing population.” It was just 9 percent of an $11 million request from the Parks & Recreation Department. Although his bond request was reduced to a mere $60,000 [1% of the original total capital request]… Most of the other items Gallavan requested 50 years ago could be moved intact and unfinished to a similar request in 2014.”

“In lieu of flowers, just plant a few more this spring – that’s how Pat would have wanted it.” 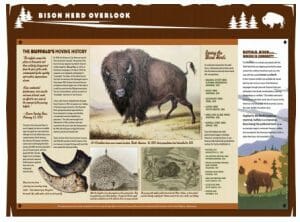 Donations in his memory were accepted in support of the Foundation’s work educating the public about and improving access to the historic Mountain Parks bison (buffalo) herds. In 2015, this fund collected more than $1200 for that project, now approaching completion.

“I spent a lot of time with Pat when I was on the Park People Board many years ago. He was a terrific help in many ways, always knowledgeable and calm and a very nice person to deal with. He surely will be missed.” –Pat McClearn