All the breaking news!

At the Tattered Cover Nov. 2nd 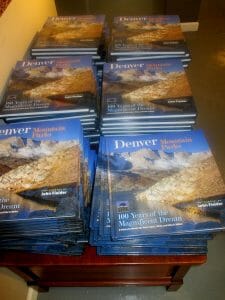 We had a great time last Saturday afternoon at the Tattered Cover (Rocky Mountain Land Series) talking about our book and hosting a book signing. It was a pleasure to hear the Foundation’s Bart Berger, John Fielder, and authors Erika Walker and Sally White share their perspectives (and photos!) on the project with such a receptive audience.

Thank you! And our thanks to Jeff Lee of the Tattered Cover for setting up the event.

For a list of other book signings John Fielder is doing this fall, please visit JohnFielder.com. Lots of opportunities to buy the book for gifts, or for yourself! 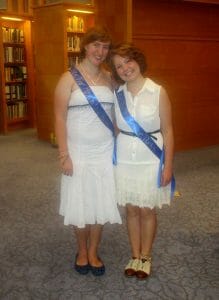 “In the final days of the election, they dressed pretty girls up with white dresses and blue sashes that read ‘Vote for the Mountain Parks,’ and they placed them at each polling place; the measure passed by 8,000 votes… Sex sells.”

Shortly after the Foundation was formed, CPR interviewed Bart, and they kindly provided a fresh link to that 2005 discussion, in which Bart commented:

“Mountain Parks are the 13th kid at a 12-kid dinner. And because they’re not right there in front of you, they’re a little ‘out of sight, out of mind.’ ”

The new centennial book, released by the Foundation in August, is intended to help raise the profile of this historic park system and generate renewed enthusiasm for Denver’s Mountain Park legacy, now 100 years in the making. The new book was recently reviewed by Warwick Downing, grandson and namesake of one of the system’s early supporters, at the Center for Colorado and the West. Of the book, Downing writes:

It is the moving historical narrative of an idea that morphed into a treasure for the City of Denver. A reader can watch in awe as its hardheaded business leaders, in Denver’s early years, were transformed into visionaries. An impossible dream yielded into a magnificent dream. But unlike others with huge visions, those early dreamers achieved theirs.

Of the parks’ past—and future—Downing remarks:

Calls for the divestiture of the Mountain Parks have been weathered—so far. … One cannot read, and see through the Fielder photographs, the treasure we have without wanting to weep at the thought of giving them up… This book is a must.

As of today, you can join, like, or follow the Foundation and its Magnificent Dream on Facebook as well. Please stop by and say hi! If Facebook is your game, look for our name!